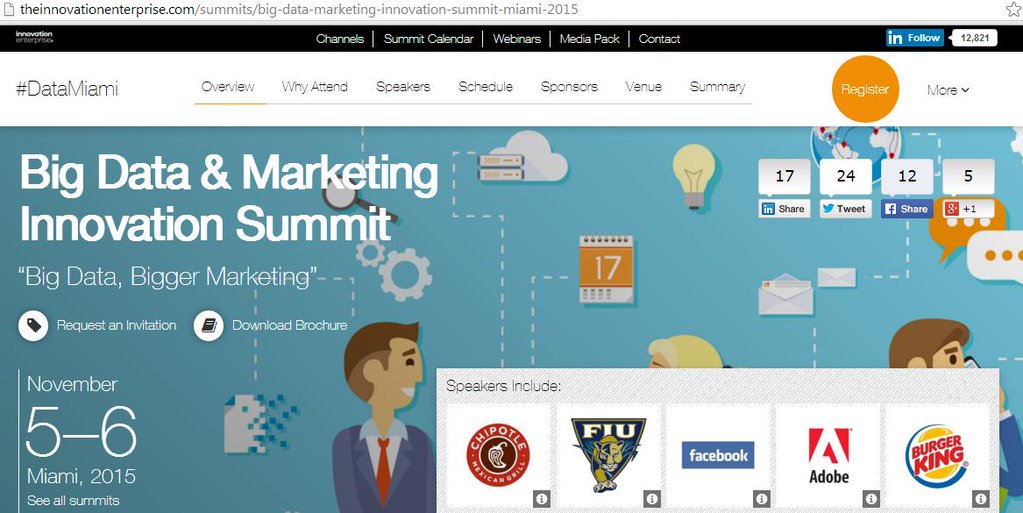 As a marketer that’s constantly struggling to find more actionable insights from the large piles of data that are just happening around us, I was hoping to learn more about an affordable out-of-the box solution to capacitate me do this, but as it turns out, it either really expensive, or you have to do it yourself, as there really is no one size fits all solution for this yet.

Moreover, I’ve learned that whatever I’ve thought to be an old cliche joke about Big Data, it still holds true for most of the publisher, and that most of them have actually never heard the joke before. So maybe it’s not so cliche after all. Wanna hear the joke? Here goes: “Big Data is just like teenage sex: Nobody is really doing it; everybody thinks everybody else is doing it so everyone says they do it”. Funny that this actually came from Adobe’s GM of Customer Analytics, Raj Sen, that had a very insightful presentation nevertheless.

Probably, the key takeaways for someone like me who is struggling with things as customer analytics and predictive modeling, and I’m not ashamed to admit it, were the ones trying to get a more structured approach to big data by starting small. Small as in baby-steps approach, small as in small budgets. Rather than a holistic view of here’s what you should have done in the end, but we’re not gonna tell you how.

One importand insight for me was FUI Monica’s approach on data, in the sense that we should really know what we’re after even before going out and capturing all that data. Identifying the business opportunity is the key to focusing exactly on those areas that have the highest potential to improve your business. But knowing that, wouldn’t it intuitively make sense that you actually do NOT need Big Data to get it done? AS a matter of fact you don’t, but you need data to prove it.

So baby steps is not bad. Go ahead and identify a business potential, come up with an improvement hypothesis, go there and build it, and just log enough data to be able to prove the hypothesis. And do that with whatever tools you have at hand. Even if that requires sketching something up with a developer or two in a week or so. That’s clearly one step to sucess. And it’s clearly better than no step. Doing one this month, a couple more thoughout the quarter will give you enough insights on where you should be doing the most improvements to your business, and will buy you time to get that Big Deal of Data up and running, where everything just automagically works with predictive modelling and all fancy stuff.

Another great learning I took from Joel, a fabulos speaker, currently the CMO of Enjoy Life which showed us that you don’t really need big data or big budgets to get your business going. Or to take it to another level for that matter. How he’s doing it? By being in extremely close contact with his consumers, and engaging them on various social media platforms, handled or managed by just a handful of very young, albeit dedicated and enthusiastic people. How he’s collecting the insights? Interns with excels. Now that’s a lot of Data Power, and may it not be big, it’s massive. And it’s cheap. And you can start today.

Funny was also to see that when these big players in the market are asking each other how they address these particular challenges, and everybody were like “this is our top objective for 2016”, hinting that “they’re not really doing it”, everyone felt relieved by finding out that “oh, so you guys didn’t figure that out either”. Was that reassuring for me? No!

What has all this shown to me? That one should not make Big Data as a scope in itself, but rather see it as means of getting your business really to the next level (whichever that may be) when all else is drained to the last bit.